Hero of the Liberty Incident 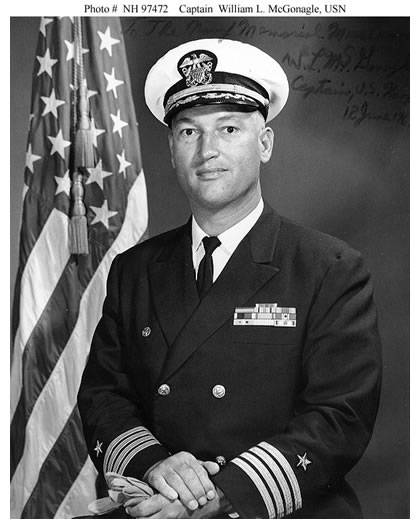 Most of us have done at least one of these things at some point during our professional lives, and it’s nothing to be ashamed of. Most sensible bosses know that there’s a limit to what can be reasonably expected of employees that aren’t operating at full capacity. Whether it’s as simple as a bad day or as severe as a broken leg, sometimes you just need a little time to recuperate before returning to work. It doesn’t mean you’re lazy or unmotivated, just that you’re normal.

Sometimes though, people who could settle for being normal instead prove that they are extraordinary. Such is the story of Medal of Honor recipient Captain William L. McGonagle of the United States Navy.

Born in 1925, William L. McGonagle grew up in Kansas where he attended primary and secondary school before going to college in California. In 1944 he entered a Navy training program at the University of Southern California, and after completing it in 1947 accepted a commission as an ensign in the Navy.

His initial assignment was to the destroyer USS Frank Knox, where he served as a minesweeper till 1950. He continued to serve as a minesweeper on a different vessel during the Korean War. His efforts, and the efforts of his crew, earned the crew a Presidential Unit Citation. For the next fifteen years he served in a variety of positions and locations, both afloat and ashore.

Then in 1966, with the rank of commander, McGonagle took command of the USS Liberty, a technical research ship tasked with gathering intelligence by monitoring wireless communications. It was a quiet post. At least, until the Six-Day War.

While the political climate has always been tense in the middle east, there had been relative peace since the 1948 Arab-Israeli war. What brought national tempers to a boil was the the Straits of Tiran—a narrow waterway leading to the Gulf of Aqaba that separates the tip of the Sinai peninsula from Saudi Arabia.

The Straits of Tiran are the primary access point for the Gulf of Aqaba, a waterway that provides access to the nation of Israel. The tension in question arose from the fact that Israel wanted to use the waterway, but had to pass through the Straits to access it. Since the Straits were on the Sinai Peninsula side, the waters were firmly under the control of Egypt, a nation that was not friendly to Israel.

Egypt, in a political form of passive aggression, was denying Israel access to the Straits, preventing them from shipping things in or out of the Gulf. Israel warned Egypt that denying them access was tantamount to a declaration of war, to which Egypt responded by mobilizing forces to the Israeli border.

Deciding to take action before Egypt did instead, Israel made a series of of overwhelmingly effective airstrikes that decimated the Egyptian air forces. Having successfully crippled Egypt and gained air superiority, Israel pushed their forces back and (among other land grabs) claimed the Sinai Peninsula. 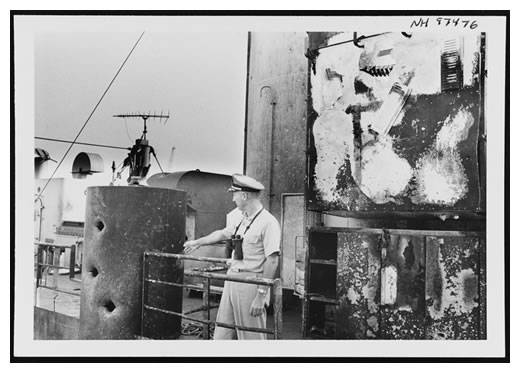 At the outbreak of the war, McGonagle requested a destroyer as an escort for his ship (which, as a research vessel, was not equipped to protect itself in the event of an attack). Vice Admiral William L. Martin denied his request, stating that the U.S. was a neutral party in the conflict, and that the Liberty was “not a reasonable subject for attack by any nation.”

Martin did, however, reassure McGonagle that in the event of an attack, relief in the form of jet fighters was only ten minutes away.

As for why McGonagle was concerned, Israel had stated publicly that they would aggressively defend their shores, including attacking unmarked vessels. It was a valid fear, especially considering how rapidly the situation had developed into open war. As you can tell from the name, the Six-Day War happened fast, and Israeli forces struck enemy targets quickly and with extreme prejudice.

On June 8th, 1967, the crew saw multiple Israeli aircraft fly over the ship throughout the course of the day. They thought little of it and continued with their duties, including even conducting a chemical attack drill. By the afternoon, however, Israeli forces had determined the Liberty to be an Egyptian vessel, and had been ordered to open fire.

The initial attack was by Israeli aircraft that fired on the ship with 30-mm cannons and rockets. This opening volley killed eight crew members and injured 75, including McGonagle, who was hit in the right thigh and the arm. The wounds were severe, and McGonagle sustained significant blood loss as a result.

In the ensuing attack, the Liberty was struck by a torpedo (that left a 40 ft. hole in the hull), napalm firebombs, and aircraft cannons. 34 servicemen were killed (including the helmsman), and 171 were injured. McGonagle had his crew radio the fleet for assistance, and fighters were dispatched from a nearby aircraft carrier, but Admiral Martin recalled them shortly after.

The attack lasted over an hour and a half, during which time McGonagle refused to leave the bridge or remand control of the ship to receive the medical attention he desperately needed. He directed the crew, ensuring that the ship managed to stay afloat and was able to navigate to safety under its own power.

Even after the attack ended, and for a full 17 hours after his initial injury, McGonagle commanded the ship and guided his crew. His injuries and blood loss were so severe that at several points, he had to lie on the floor of the bridge to prevent himself from fainting.

It wasn’t until, at long last, the Liberty was met by the destroyers USS Massey and USS Davis, and the cruiser USS Little Rock, that McGonagle allowed himself to be relieved of duty and removed from the bridge.

Earning the Medal of Honor 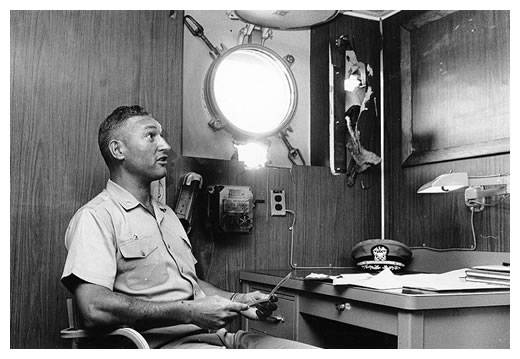 The incident, and the confusion that caused it, resulted in multiple inquiries and investigations, both by the U.S. and by the Israelis. The outcomes of those inquiries varied, and while there is some debate as to why the Israelis would be targeting a U.S. vessel, they have maintained in official statements that the incident was the result of their “shoot first, ask questions later” strategy, and that the Liberty was mistaken for an Egyptian vessel.

One thing was certain, however: the valor of McGonagle and his crew was, to put it lightly, commendable, and deserved recognition. That's why he was chosen to be a Navy Medal of Honor recipient.

Unfortunately, due to the difficult political climate surrounding the event, McGonagle was not awarded the Medal of Honor in public by the president. He was awarded the Medal in secret by the Secretary of the Navy, at the Washington Navy yard. He wept when he received the medal.

McGonagle remained in the Navy for nearly 30 years after the incident before retiring. He died in Palm Springs in 1999, and was buried with honors at Arlington National Cemetery, with members of his Liberty crew in attendance.

We should never forget how fortunate we are to have people like Navy Medal of Honor recipient William L. McGonagle, who are willing to to their duty no matter the cost, serving in our military. The 5 Best States For Hunting in the USA

Whether you’re a long-time hunter, “used to hunt” and want to get back into it, or are a first-timer, finding the best places to hunt is part of the sport. It’s easiest to look into potential hunting locations around your local area, but for ...
Read More

For law-abiding gun owners and people who want to purchase their first firearm, the various federal, state, and city firearms laws can be difficult to navigate. Lawmakers often try to make their mark to “make a difference” by creating increa...
Read More