Fire Protection: A Primary Reason to Own a Good Safe

There are many reasons to purchase a quality home or gun safe from Liberty. A well-made safe is an essential part of any home security plan, as we’ve written before. A safe can prevent unauthorized access to firearms or other potentially dangerous items like prescription drugs by children, friends, or family members. A humidity-controlled safe can be an excellent place to store valuable or irreplaceable home videos or photo albums, hard drive backups, and historical records and genealogical files. And of course, your safe helps protect all your valuables and firearms from theft. But another key feature of a good safe, which some may argue is the most important feature, is fire protection.

How many residential building (home) fires are there in the US per year?

FEMA estimates over 354,000 residential building fires per year in the US, which result in around 4,000 deaths. The San Francisco fire department also lists these fire-related facts: 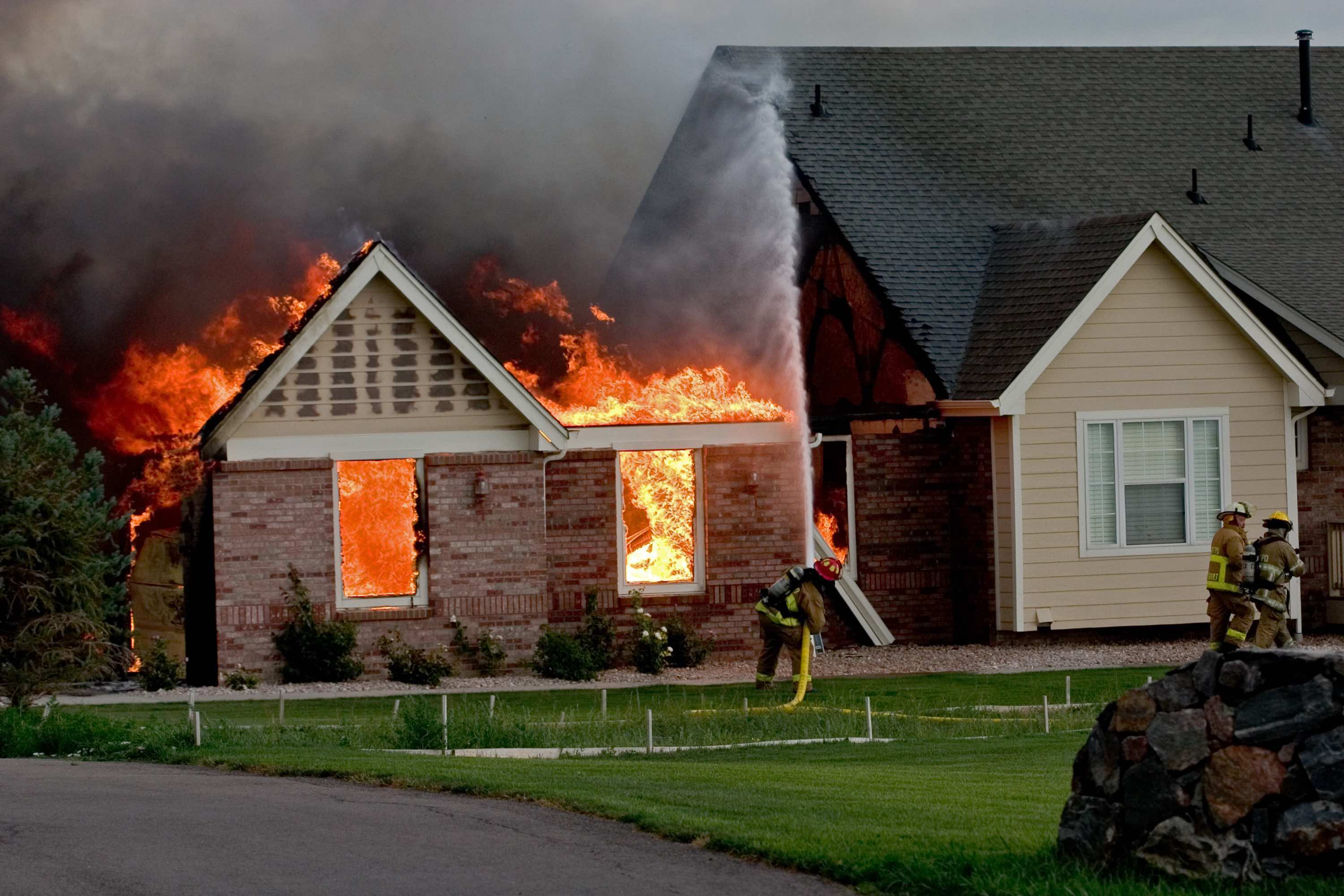 How long can a home safe provide fire protection for items stored inside?

Many safe manufacturers base their fire certification on tests that have nothing to do with how quickly temperatures rise in a real fire. In fact, many delay the ramp-up to 1200 degrees over 20-30 minutes. They do this, then claim a safe survived in the furnace “at 1200 degrees.” Some even rate their safes as high as 1400 degrees.

Liberty Safe doesn’t play these games. Our research-based fire testing protocol is founded on guidelines developed by the U.S. Department of Commerce National Institute of Standards and Technology (NIST). These guidelines were developed through a “full-scale house fire" study designed to mimic what happens during a real home fire.

And what happens during real home fires? The temperature can climb very quickly. During our fire tests, we ramp up the heat to 1200 degrees within ten minutes and keep it at 1200 degrees throughout the duration of the test to make sure our fire ratings are legitimate. Read this article for more info about Liberty’s certified fire-testing protocols.

No other safe manufacturer has tested as many safes for fire protection – we've fire-tested over 300 safes throughout our history. When we put a fire protection rating label on a safe, we make sure it can live up to that rating. Liberty safes have survived home fires, wildfires, office fires… even California’s notorious Camp Fire.

One of the reasons Liberty Safes perform better in actual fires than lesser safes is we include more fireboard than compatible competitors… but one of the key features is our use of Palusol heat-activated door seals.

Palusol is a material that has insulating properties in itself, but the remarkable thing about it is that it expands to several times its original size when exposed to intense heat. If a Liberty Safe equipped with a Palusol door seal is exposed to the types of temperatures generated by a building fire, the Palusol seal automatically expands and tightly seals any gaps around the door to protect against smoke, heat, and water.

Why water? Because, well, as they say, where there’s smoke, there’s fire… and where there’s a home fire, there’s going to be lots and lots of water. In some cases, damage from the water used to put out the fire can cause as much damage as the fire and smoke itself.

Palusol heat-activated door seals can not only help protect your safe’s contents against heat, smoke, and fire but also water damage, depending on how and where your safe is exposed.

Let’s look at a couple of real-life instances where Liberty Safes were put to the ultimate test of fire protection.

The Hester fire story: how a Liberty safe with proven fire protection gave one family hope

Dwayne and Beth Hester of Georgia experienced the worst nightmare of many homeowners when their custom-built dream home was destroyed in a house fire. The entire home was consumed. The only remaining structure standing was bits of the framing and stubs of some interior walls. When viewing the site from above, all you could see was a wasteland of ashes and charred debris.

The Hesters’ son, Jason, came to check on his parents and offer support. After ensuring his parents were safe, Jason supported them the only way he could during this shocking, devastating moment in their lives: “I stood [there] with my parents for about 6 hours… and watched the house turn into a complete, total loss.”

After the flames were out it was time to assess the damage. The firefighters found the Hesters’ Liberty Safe in the basement and were unable to pry it open, even after 30 minutes using prybars and crowbars. They had to resort to cutting open the side of the safe with industrial tools.

Jason recalls, “The firefighter reached in and he pulled out a bible that my dad had placed in there. I reached and grabbed the bible from him immediately because I had been looking for something, just any kind of hope at all. I opened the pages and I saw the pages were clean, they were white, they were not scorched or charred in any way.”

And there was more good news. “Remarkably, many of the guns were in very good shape,” says Dwayne. “I had some valuable documents and some jewelry in there that belonged to my mom. All of that was intact. Nothing was damaged. Even the paperwork I had was not burned.”

Beth relates, “The money, the valuables, his mother’s rings… that stuff was still safe. The money was never even touched.”

Beth was of course very emotional about the loss of their dream home, but she was grateful with how well their Liberty safe performed during the extended house fire. “That safe was [rated] fireproof for up to 1200 degrees for 75 minutes, she says. “It went WAY past 75 minutes.”

Though this kind of devastating home fire is a nightmare for any homeowner or family, the peace of mind that comes with storing your truly irreplaceable items in a fire-resistant safe can scarcely be measured.

Another real-life test of fire protection: a fire in a safe store

Lynn McCutchen of Paducah Shooters Supply founded a gun shop in 1983. Over the years, the business grew to offer much more: gun safes, fishing supplies, clothing, and pretty much everything you’d ever need for hunting. Then one Sunday, tragedy struck when a fire broke out in the store.

McCutchen, his family, and their employees watched in horror as the fire ripped through the building. “[It] took an hour and a half to get the fire under control,” McCutchen recalls. The front section of the store was all but destroyed. And the area where Paducah Shooters Supply sells safes? “Tremendous heat and smoke damage to all that,” McCutchen says.

Once the flames were out and the area had had time to cool down, McCutchen and a few employees began to assess the damage. According to them, out of four safe brands they offered in the store, the Liberty safes held up the best. One employee says they began opening up the safes that had survived the fire to see what the insides looked like. “We got into the Libertys,” he says, “and [they] were clean on the inside… the new [Palusol] seal that Liberty’s got is really impressive.”

Many of the other safes had extensive smoke damage inside, but not the Libertys. One employee said the whole building smelled like smoke, but when you opened a Liberty safe, “It still [had] that fresh smell from the factory.”

McCutchen was anxious to see how one safe in particular held up. He says, “We have a Liberty Safe in our office… My secretary puts all the money and all of our valuables in it every night.”

Once the fire department had cleared him to re-enter the store, McCutchen headed into the office to see how the office safe had fared in the fire. “The fire damaged the safe extensively. It melted the lock off of the front of it. They spent an hour on it trying to pry it open with no success.” But once they finally managed to get the Liberty opened, McCutchen was thrilled.

“No smoke damage, no heat damage whatsoever. Perfect in every way,” he says.

You can’t ask for better than that.

Check out Liberty’s line of home and gun safes with up to 2.5 hours of certified fire protection at 1200º F. The 5 Best Fishing Spots in America

Heading out to the ol’ fishin’ hole with a picnic lunch and a cane pole is about as down-home American as anything you can think of, but these days, recreational and “destination” fishing is a healthy part of the USA’s tourism and jobs creati...
Read More